On 19 March 2016 the Radio 4 Moneybox programme took calls from people in Carlisle who had been affected by severe flooding the previous December and had their insurance policies voided because of confusion about how close they lived to the River Eden.

The insurer, Integra, said that the insureds had failed to correctly answer key questions on the flood risk to their property. They had stated that their homes were more than 400 metres from the river when they were actually closer.

“It was just a tick box question along with all the others. They didn’t tell me that it was important”, said the callers,

“I gave Integra the information that I thought was correct. I wasn’t trying to mislead them”

“I’ve never made any claims on my home insurance before and now we need them they’ve turned their backs on us!”

A common theme emerged: the insureds had answered these key questions honestly and to the best of their knowledge, while the insurers were acting unfairly and unreasonably.

The Insurance Act 2015, which comes into force on 12 August 2016, is the most significant reform of UK insurance contract law for a century. The Act is intended to materially change the way in which the business of insurance is conducted and to extend the reforms made to consumer contracts in 2009 to non-consumer insurance contracts, to make it harder for insurers to avoid claims for technical breaches by the insured.

The Act can be seen as part of the general shift towards a more insured-friendly regime. This has also been seen in the Enterprise Act 2016, which introduced an obligation on insurers to pay within a reasonable time, and the recent decision of the Supreme Court in Versloot Dredging BV & Another v HDI Gerling Industrie Versicherung AG, which ruled that a ‘collateral lie’ told as part of an insurance claim did not defeat the whole claim. This decision was seen by some as a departure from the previous position. 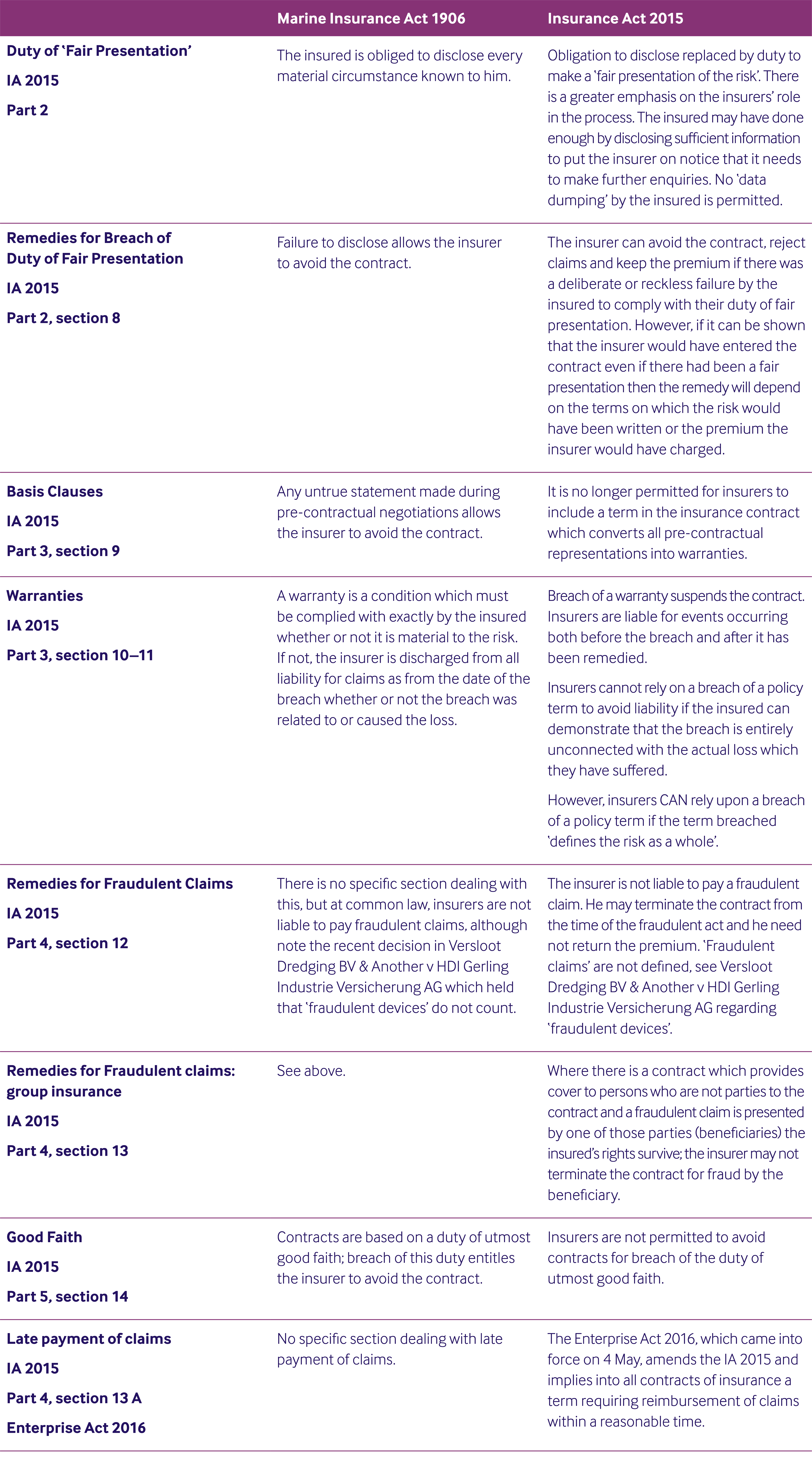 Although the Act is intended to herald a more insured-friendly regime, it also introduces some new concepts and, with that, considerable uncertainty. For this reason, many International Group P&I Clubs have chosen to exercise their right to contract out of some sections. Insurers may contract out provided they do so in a ‘transparent fashion’ at the outset of the contract.

For example, the concept of s.11 of ‘whole risk’ is a new one and both insureds and insurers can expect legal challenges until the courts have resolved what this means. Seven UK-based IG P&I Clubs have contracted out of this section. For example, many Club Rules provide that the entered vessel must remain in class, and that cover is suspended while the vessel is out of class, subject to the discretion of the Board of the Club. This is less harsh than the Marine Insurance Act 1906 provisions. Insurers who opt in to section 11 might have the right to rely upon a loss of class to deny a claim, regardless of whether it was the cause of a loss.

Many IG clubs are contracting out of sections 13 and 14 (group insurance and utmost good faith) and section 13A (late payment of claims), although insureds still have the protection of the act if the insurer deliberately or recklessly fails to pay the claim. Insurers are not permitted to contract out of section 9 (basis clauses).

One notable section about which change was discussed but not implemented is section 53 of the Marine Insurance Act, which provides:

The section codified the traditional practice where an insured required additional time to pay the premium but the Lloyd’s marine underwriters were only prepared to extend credit to the Lloyd’s broker with whom they were dealing. This practice developed into a custom whereby the underwriter looked for payment to the broker alone who would, in turn, either pay the amount of the premium directly to the underwriter or credit the underwriter in his running account before obtaining reimbursement from his client, the insured.

However, there are obvious practical difficulties for the insurer with this rule (for example where the broker is insolvent). Reform of the section was considered by the Law Commission to bring it more in line with non-marine insurance, where the broker usually holds the money on trust for the insured or receives it as agent for the insurer (respectively, a ‘non-risk transfer’ and a ‘risk transfer’ Terms of Business Agreement). However, some of the proposed reforms proved controversial and changes to section 53(1) were not included in the bill which eventually became the Insurance Act 2015.

Section 85(2) provides an exception for mutual insurance, and so section 53(1) does not apply to unpaid calls from Members to P&I Clubs for example. This section also remains unchanged.

While the Act is intended to provide greater protection for insureds and make it harder for insurers to avoid claims for technical breaches, it also introduces significant uncertainty in some areas. However, it is possible for insurers to contract out of most of the new provisions. There are limits to the insurers’ ability to contract out, in particular they must do so in a ‘transparent fashion’, and there is some uncertainty about what this means. Some are predicting that the next stage of reform will be to remove the insurers’ right to contract out altogether.

However, if your insurers have contracted out and reverted to the more familiar Marine Insurance Act 1906 concepts, this will afford them and you some certainty, at least for the time being until any legal challenges arising out of the new Act have been tested by the courts.

Enter your contact details to receive our news and insights.